Lisp is the best language. But the Blub Empire is taking over the world!
Fight for your favorite programming language in this Medieval Strategy Game.

Sorry for the dumb AI, it is definitely bad, but I didn't got the time to make it fun to play against.

Don't hesitate to zoom the page to better see the game.

The game is written in a custom Lisp language called wasm-adventure (written in Racket) that transpiles directly to WebAssembly.

This means the game does not use any framework nor graphics engine. I had to build everything from the ground up byte by byte in assembly, then write utility functions to draw to the screen (which basically consists in writing bytes to a specific location in memory).

You can check out the code on Github here. To jump directly to the game code, see this file.

Under the hood example:

A simple wasm-adventure function I wrote:

Then Racket transforms the code into a WebAssembly function:

Then the web assembly toolkit resolves the code into this 1-to-1 equivalent WebAssembly binary:

As you can see, this looks fairly close to actual CPU assembly, except it runs in the browser! 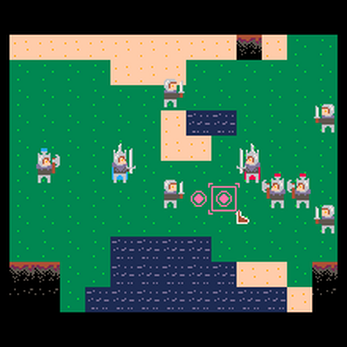